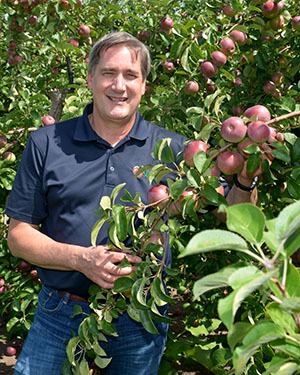 John is Executive Vice President, Secretary and Treasurer of The Lyman Farm, Inc (known as Lyman Orchards). He is a member of the eighth generation of the Lyman family that has been farming in Middlefield since 1741. John’s primary responsibilities include overseeing orchard and commercial pie operations. He works closely with company President and CEO Gary Jalbert in strategic planning and product development. John is the face of Lyman Orchards with the media and public affairs. He has done just about every job at the Farm over the years except teach golf! Like his father, Jack Lyman, and his grandfather, John Sr., John grew up on the family farm, learning from the ground up the challenges and rewards of Connecticut farming and land stewardship. A 1979 graduate of Colby College, Waterville ME., John holds a BA in American Studies. After college and before joining the family business full time in 1980, John worked on an apple and pear orchard in Holland where he claims to have received his ‘formal’ education in fruit growing. John remains actively involved in Connecticut agriculture, and his industry involvement throughout the New England region has been extensive. He is currently a Director of the New England Apple Council, and a Trustee of Red Tomato. Past appointments include serving twelve years as a Director on Farm Credit East’s Board of Directors, President of the Connecticut Agricultural Businesses Cluster, Director and Vice Chairman of the Connecticut Agricultural Experiment Station’s Board of Control, President of the Connecticut Pomological Society, Chairman and Director of the New England McIntosh Growers Assoc., and President and Director of the New York and New England Apple Institute. John resides in Middlefield with his wife Elaine. They have 3 grown children, Adam, Sarah and Laura.

Middlefield, CT — Lyman Orchards, a popular family-owned New England destination for over 280 years is pleased to announce a recent $15,573 donation to Connecticut Children’s using proceeds from its 2022 Sunflower Maze. Lyman donates one dollar from each Sunflower Maze admission to benefit patients at Connecticut Children’s Center for Cancer and Blood Disorders. Over […]

Middlefield, CT — —Lyman Orchards, a family-owned popular destination for over 280 years, is again hosting the Dazzling L.I.F.F.E. Lantern Festival, a holiday attraction that features more than 400 illuminated lantern displays. This year marks the second consecutive year that Lyman Orchards has hosted the event. Running December 14, 2022 through January 31, 2023, and […]

Middlefield, CT — —Lyman Orchards, a family-owned popular destination for over 275 years, has been named among the Top 10 Apple Picking Spots in the U.S., according to Yelp.  Each year, Yelp publishes an all-time list of the Top 25 apple picking orchards across the country.  Apple picking is one of the many Pick-Your-Own fruits […]

Middlefield, CT — —Lyman Orchards, a family-owned popular destination for over 275 years, has announced that September 3 is the opening day for its 2022 Ben Franklin Corn Maze. Fourth in a series of  "All American" History maze themes, this year’s Ben Franklin Corn Maze—situated on four sprawling acres—will spotlight American history and scientific discoveries. […]

Middlefield, CT — Lyman Orchards, a popular family-owned New England destination for over 280 years, announces that July 30 is the opening day for its 2022 Sunflower Maze. This year, 350,000 yellow, orange, and red blooming sunflowers are crafted into a design featuring Daniel Tiger's Neighborhood®, the beloved preschooler animated series produced by The Fred […] 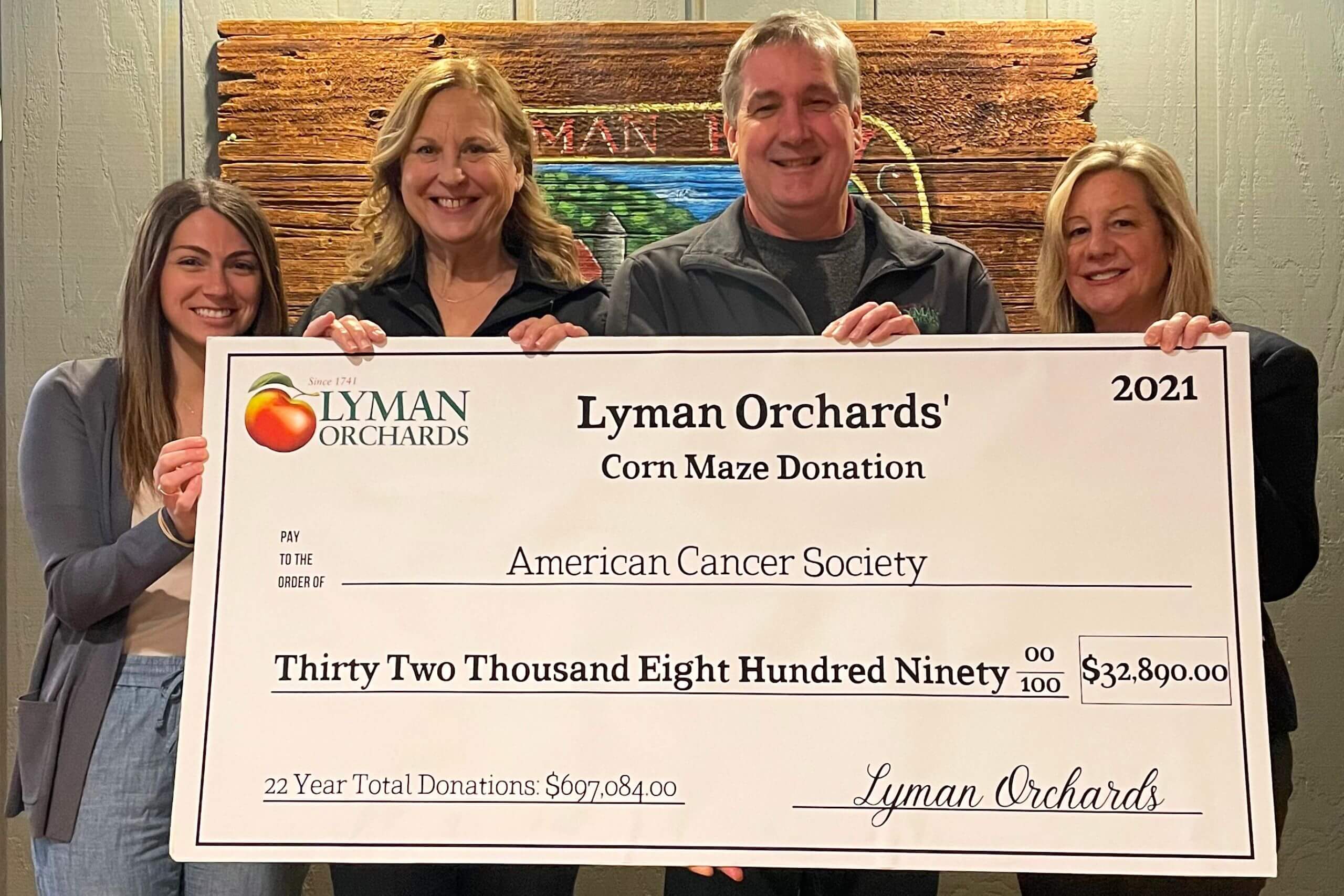 Middlefield, CT — Lyman Orchards, a popular family-owned New England destination for over 280 years, is pleased to announce a recent $32,890 donation to the American Cancer Society using a portion of the proceeds from its 2021 Corn Maze. The Corn Maze at Lyman Orchards is an annual event that attracts families across New England. […]