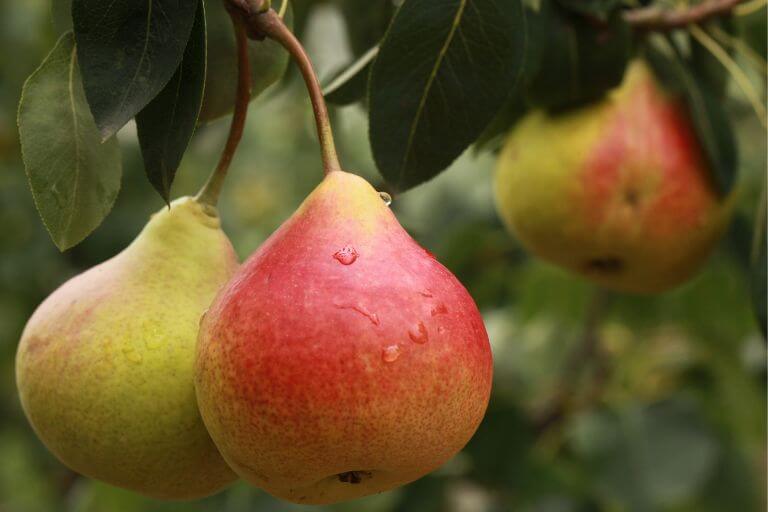 Pear lovers are singing praises for Clapp's Favorite Pears, one of the first pear varieties on the scene at Lyman Orchards during Pear Season.

Available during late summer through early fall, Clapp's Favorite is one of the best pears for fresh eating, featuring a gorgeous yellow skin with a crimson red blush,  delicate texture, and juicy consistency. Clapp's Favorite pear is aromatic, crisp, with a mild, sweet flavor balanced with low acidity.  Originally from Massachusetts and discovered in the 1800’s, this pear has been a crowd favorite for centuries!  Known as one of the finest pears straight from the tree, many of our grandparents may have commonly grown this first-to-the-market pear variety.

The Origins of Clapp's Favorite Pears

As history has it, pears were once grown in abundance in Dorchester, Massachusetts, and it just so happens the Clapp's Favorite Pear was invented there!  Among the founding families of Dorchester, the Clapp's originally sailed in from England in 1630. During the 1800's, a Clapp farming family began experimenting with new types of fruit tress, and successfully cross-bred a Bartlett tree with a Flemish Beauty tree to create a new variety of pear which was aptly named "Clapp's Favorite."

Today, a 12-foot bronze sculpture of a Clapp's Favorite Pear stands in Dorchester Square on the land that was once farmed by the Clapp family.

Lyman's Pear Season extends from late-August until late-September, but always call the Lyman Orchards Pick Your Own Hotline at 860-349-6015 before heading out.  While there's plenty of room amongst our rows and rows of pear trees, crowds are generally lightest Monday-Friday.  You can find our 2022 Pick Your Own procedures here.

We look forward to being part of your PYO pear adventure, and we thank you for your patronage!  Lyman Orchards is a pick your own “agritainment farm” in CT with hundreds of acres dedicated to picking your own farming, golfing, dining, entertainment, and retail.  So after you’ve picked a perfect peck of peaches, we invite you to dine at the 1741 Pub & Grill or grab a sandwich or an ice cream at the Apple Barrel Farm Market.  Also, remember Lyman Orchards Golf for your golf day and lessons.  There’s something fun for everyone happening at Lyman Orchards - be sure to check out our Events regularly so you don’t miss out!