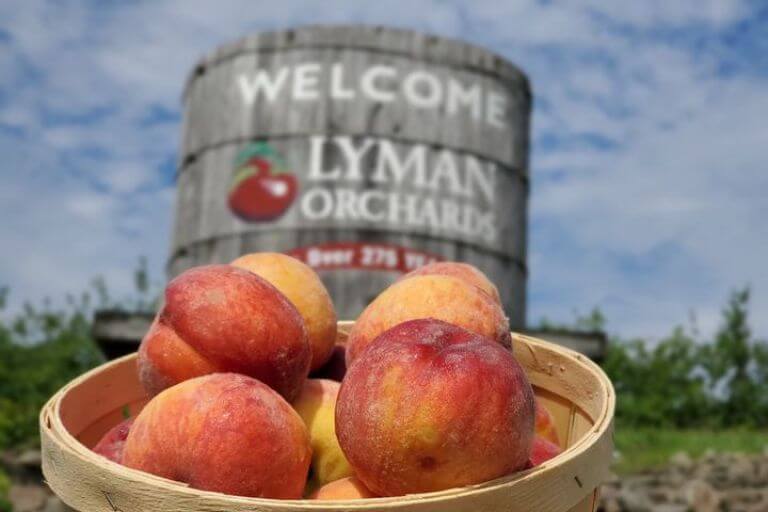 There's a lesser-known reason why Lyman Orchards nearly had a giant peach instead of an apple as our logo. When it comes to growing peaches,  Lyman Orchards has a deep-rooted history dating back 130 years! In fact, that's how Connecticut's top-rated pick your own farm got it's start in the commercial fruit crop growing business.

In the early 1890's Lyman Orchards was among a growing number of Connecticut farmers aggressively planting peaches, and by the early 1900's, Connecticut was one of the largest peach producing states in the country, second to only Georgia! From a marketing perspective, it made perfect sense as a high-value specialty crop in close proximity to two major population centers, Boston and New York. By 1915, Lyman's was growing 500 acres of peaches - a giant peach crop indeed!

Unfortunately, the enterprising business venture of peach growing wasn't all peaches and cream, and if things turned out differently, Justin Bieber may have been singing "I got my peaches out in Connecticut."  Connecticut fruit growers learned the hard way that our state's climate is on the far northern edge for growing peaches, and during the harsh winter of 1918-19, extreme cold temperatures killed all of Lyman Orchards peach trees.  However, this cruel reality took several years to fully realize, as all 500 acres of trees died a slow death.

As any resilient farmer can attest, the crop growing business is not for the faint-hearted.  Lyman, along with other Connecticut Peach growers spent the next decade replanting orchards with winter-hardy apples. Needless to say, it was a very difficult and lean time for the Lyman farm. But on the flipside, that's how apples became Lyman Orchards' main tree fruit crop!  Since the disastrous freeze, Lyman Orchards continues to grow peaches, but on a much smaller scale.

Today, Lyman Orchards' peach orchard acreage expands over 32 acres made up of 4,200 trees and 37 varieties of peaches, including three flat varieties! The peach varieties range from clingstone to freestone. The early varieties are classified as "clingstone", indicating that the sweet flesh of the peach clings to the pit or stone, early-mid season are "semi-cling", and by mid-August, all varieties are "freestone". Mid-August and later varieties are best for canning and preserving peaches.  We also hold an annual Peach Festival in August to celebrate National Peach Month!

At Lyman Orchards, we pick peaches that are firm ripe and then cool them to 35-40 degrees. If you prefer soft peaches, leave them out at room temperature for a day or two and they will begin to soften. Here at Lyman's we have a term for a really ripe, juicy and delicious peach, "It's a two-napkin peach."

Lyman's peach season extends from early to mid-July until most of September-for a full 12-week season, but always call the Lyman Orchards Pick Your Own Hotline at 860-349-6015 before heading out.  While there's plenty of room amongst our rows and rows of peach trees, crowds are generally lightest Monday-Friday.  You can find our 2022 Pick Your Own procedures here.

We look forward to being part of your PYO peach adventure, and we thank you for your patronage!  Lyman Orchards is a pick your own “agritainment farm” in CT with hundreds of acres dedicated to picking your own farming, golfing, dining, entertainment, and retail.  So after you’ve picked a perfect peck of peaches, we invite you to dine at the 1741 Pub & Grill or grab a sandwich or an ice cream at the Apple Barrel Farm Market.  Also, remember Lyman Orchards Golf for your golf day and lessons.  There’s something fun for everyone happening at Lyman Orchards - be sure to check out our Events regularly so you don’t miss out!

Unite your remote employees with an outdoor team-building activity at the Lyman Orchards Sunflower Maze or Corn Maze. Remote work arrangements are prevalent, progressive, and popular with employers and employees alike, but maintaining the morale and cohesiveness of a remote workforce can be challenging. The absence of in-person collaboration and communication can create a disconnect […]

There's a lesser-known reason why Lyman Orchards nearly had a giant peach instead of an apple as our logo. When it comes to growing peaches,  Lyman Orchards has a deep-rooted history dating back 130 years! In fact, that's how Connecticut's top-rated pick your own farm got it's start in the commercial fruit crop growing business. Lyman […]